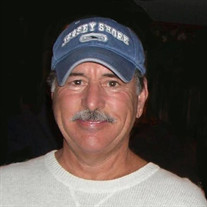 Ronald C. Mayer, 74 of Estero, FL passed away peacefully on April 18, 2022 at Joanne’s House at Hope Hospice. Formerly of Toms River, NJ he had been an Estero resident for the past 7 years. Ronald was born June 3, 1947 in Garfield, NJ a son of the late Charles and Georgette (Molinari) Mayer. He attended St. Bonaventure University (Go Bonnie’s!) before earning his bachelor’s degree in history at Siena College in Loudonville, NY. Mr. Mayer had a long, successful real estate career in New Jersey. He especially enjoyed trips to the casino with Linda as well as boating and working on home projects. Ron was also a fan of the New York Giants and all things NFL. He lived for the Sunday Red Zone during football season. Ron had a zest for life and will be remembered for his generosity. Ron was always extremely appreciative of the kindness and generosity of others toward him – never failing to say thank you or trying to make you smile with his Donald Duck voice. Survivors include his loving siblings, Richard (Rena) Mayer of Estero, FL, Jane (Karl) Krutzky of Snellville, GA, Charles (Linda) Mayer of Naples, FL, Judy Klim of Snellville, GA, and many nieces and nephews. In addition to his parents he was preceded in death by his wife of 45 years, Linda Mayer in 2021. A funeral service will be held on Wednesday, May 11, 2022 at 10:30 AM at Shikany’s Bonita Funeral Home, 28300 Tamiami Trail So., Bonita Springs, FL 34135. In lieu of flowers, memorial contributions may be made in Ron and Linda Mayer’s names to Joanne’s House at Hope Hospice, 27200 Imperial Parkway, Bonita Springs, FL 34135. Arrangements are being handled by Shikany’s Bonita Funeral Home, Family Owned Since 1978.

Ronald C. Mayer, 74 of Estero, FL passed away peacefully on April 18, 2022 at Joanne&#8217;s House at Hope Hospice. Formerly of Toms River, NJ he had been an Estero resident for the past 7 years. Ronald was born June 3, 1947 in Garfield, NJ... View Obituary & Service Information

The family of Ronald C. Mayer created this Life Tributes page to make it easy to share your memories.

Send flowers to the Mayer family.