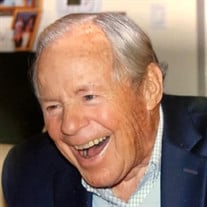 Rudolph Henry King, 87, of Bonita Springs, FL passed away peacefully on February 8th surrounded by his loving family. He is survived by his wife of 65 years, Nancy Jo and his daughters and grandchildren - Cindy Dell (Chip, Jason, Ashley, Rudy), Sharon Wencel (Bruce, Holly, Jennifer) and Jennifer Churchfield (Marty, Max, Ali, Brynn). As well as, his 6 beloved great-grandchildren. Rudy was born on October 26, 1934 in Evanston, IL. He attended Brown University where he was a member of Beta Theta Pi fraternity and earned a Bachelor’s degree in 1956. After graduation, Rudy began a career in sales and served in the U.S. Army Reserves for several years. In 1972, Rudy moved his family to Madison, WI to launch a successful career as the President of Wisconsin Office Supply Company until he retired in 1997. He served on several Boards and Associations throughout his professional career. Rudy spent much of his free time at the pool- as a parent, a AAU Stroke official or calculating the exact time a swimmer would compete so other parents wouldn't miss their child’s event! But he was known by many for his infectious smile, corny jokes and magic tricks. He enjoyed golfing, cooking and would always sing the Evanston High School fight song or “I’m a Brown man born, I’m a Brown man bred and when I die, I’m a Brown man dead” from his days at Brown University. A private Celebration of Life will be held on March 21st in Long Boat Key, FL where Rudy’s family vacationed together since 1978. Donations can be made in his name to: Team One Lung King - the Chicago American Lung Association https://action.lung.org/site/Donation2?df_id=31272&mfc_pref=T&31272.donation=form1 The Terraces Scholarship Fund https://www.theterracesatbonitasprings.com/foundation To sign Rudy's guest book or to leave on line condolences, please visit www.ShikanyFuneralHome.com Arrangements are being handled by Shikany's Bonita Funeral Home and Crematory Family Owned and Operated Since 1978.

Rudolph Henry King, 87, of Bonita Springs, FL passed away peacefully on February 8th surrounded by his loving family. He is survived by his wife of 65 years, Nancy Jo and his daughters and grandchildren - Cindy Dell (Chip, Jason, Ashley, Rudy),... View Obituary & Service Information

The family of Rudolph "Rudy" King created this Life Tributes page to make it easy to share your memories.

Send flowers to the King family.