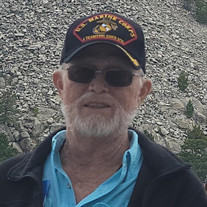 Russel "Russ" Lamkins of Bonita Springs, Florida passed away peacefully at home on Saturday, January 29, 2022. In his 75 years, he lived a fulfilled and honorable life doing what loved, which was working with his hands in carpentry and construction. Russ was born August 5, 1946 in Ogdensburg, Wisconsin to the late Lowell and Blanche (McKay) Lamkins. He was a middle child of seven children, and worked on the family dairy farm growing up. He enlisted in the United States Marine Corps and served as a Radioman, in combat, during the Vietnam War. He was honorably discharged and returned to his home in Ogdensburg and started Lamkins Construction, focusing on residential and commercial building. He also volunteered with the Ogdensburg Jaycees, including serving as the chapter's President. Russ worked for Millcraft Housing, which lead to relocating to Clear Lake, Iowa in 1977. He later formed his second residential and commercial construction business, Lamkins and Paulson Construction. In 1988, he and his family relocated to Naples, Florida, where he worked for BCBE Construction as a superintendent until he retired in 2010. In 2012, he moved to Bonita Springs, Florida, where he and his bride, Sandra "Sandi" Bottcher, found their "home in paradise" and spent 10 of their 20 loving years together. Russ will be remembered for his love of woodworking and carpentry, his ability to solve even the most impossible puzzle, his beautiful craftsmanship, and singing "Mamas, don't let your babies grow up to be…carpenters" while happily working. He and Sandi enjoyed traveling all over the United States in their motorhome, as well as boating, fishing, and volunteering with the Optimist Club of Bonita Springs. Survivors include: his wife, Sandra Bottcher; children, Angela (Andy) Lamkins-Rogers and Tyler (Karen) Lamkins; step-son, Keenan (Brooke) Hopple; brothers, Roy (Gloria) Lamkins and Gary (Linda) Lamkins; sisters, Betty Stevens and Cheryl Lamkins; mother-in-law, Anne Bottcher; granddaughter, Elizabeth; and step-granddaughters, Ruby and Rebecca. In lieu of flowers, memorial contributions in Russ’s name may be made to Moffitt Cancer Center or American Cancer Society. Arrangements are being handled by Shikany’s Bonita Funeral Home, Family Owned Since 1978.

Russel "Russ" Lamkins of Bonita Springs, Florida passed away peacefully at home on Saturday, January 29, 2022. In his 75 years, he lived a fulfilled and honorable life doing what loved, which was working with his hands in carpentry and construction.... View Obituary & Service Information

The family of Russel Lowell Lamkins created this Life Tributes page to make it easy to share your memories.

Send flowers to the Lamkins family.