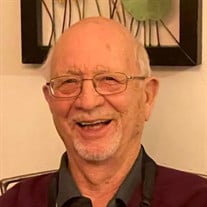 Scott Gerrish 88, of Bonita Springs, FL died Wednesday, March 30, 2022, at North Collier Hospital after a brief illness. Scott was born on December 25, 1933, in Somerville, NJ the only child of the late Carroll C. and Winifred L. (Scott) Gerrish. He moved to Bonita Springs in 2000 coming from Londonderry, NH. He was raised in Andover, MA, and was a graduate of Punchard High School. After high school, Scott went on to Dartmouth where he completed his undergraduate studies. He then earned his Master’s degree in Business Administration from the Tuck Business School at Dartmouth. Scott served his country in the U.S. Navy as an antisubmarine pilot from 1955 until 1959. In 1961, he was recalled to active duty due to the Bay of Pigs. He served an additional two years and was discharged in 1963 as a Commander. Upon returning home, he became a corporate pilot for Sanders and Associates in Nashua, NH. He then joined Process Engineering in Plaistow, NH, and served as their Controller for over 30 years until his retirement in 1999. In 1968 the family moved to Derry, NH where Scott was very active in the community serving as a Selectman and in the Rotary. He was a member of the Hope Lutheran Church in Bonita Springs. At church, he was an usher, managed attendance stats, and coordinated events. He was also a member of the Bonita Springs Rotary Club and was the former editor of Spoke magazine and a former Rotarian of the Year. He is survived by his children, Caren Perdigao and her husband, Mike of Columbia, MD, Scott Gerrish, Jr. and his wife, Leah of Auburn, NH and Glenn Gerrish of Bennington, NH; 7 grandchildren, 6 great-grandchildren, and his son-in-law, Randall Moquin of Bradford, NH. He was preceded in death by his first wife, Marion White in 1999, his daughter, Lynn Moquin in 2013, and his second wife, Amalia C. Gerrish who died in 2020. A Memorial Service to celebrate his life will be held at 2:00 PM on Sunday, April 3, 2022, at Hope Lutheran Church 25999 Old 41 Rd., Bonita Springs. The link for streaming is https://hlcbonita.org/scott-gerrish-memorial-service/. To sign his guest register or to leave online condolences, please visit www.ShikanyFuneralHome.com. Arrangements are being handled by Shikany’s Bonita Funeral Home Family Owned and Operated Since 1978.

The family of Scott Gerrish created this Life Tributes page to make it easy to share your memories.

Send flowers to the Gerrish family.