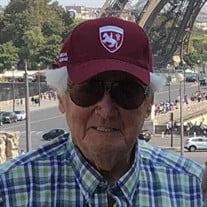 Stephen Alexander Welsh, 82, passed away peacefully at home on his birthday, May 14th with his wife at his side. Stephen was born in St. Louis Missouri, one of two children of Kendall Reiser Welsh and Margaret Alexander Welsh. He earned his bachelor’s degree at University of Miami (a loyal Hurricanes fan) and completed his master’s in business administration at Washington University in Saint Louis. He was father to two sons with Marjorie Welsh, Stephen and Eric Welsh. Stephen rose through the ranks as an executive at Ford Motor company for 30 years, during which he spent time living in Paris, Brazil and Mexico, where he acquired a love of Mexican art and history and seeing the world. Subsequently, he settled in Detroit where he met his second wife, Martha Goodloe. Following their marriage in 1997, Stephen moved with Martha to southern California, where he served as Chief Financial Officer for Nissan North America. The couple acquired a home in Manhattan Beach and enjoyed life together near the ocean. Following his tenure at Nissan, Martha and Stephen retired together to Naples, the home base from which they traveled across Europe. Members of the Audubon Country Club may also remember Stephen as an expert bocce ball and croquet player and a less expert sailor of electric sailboats. Stephen stayed committed to his bocce ball teammates through his recent illness, recently requesting ambulance transport from the hospital to he could watch his team play in the semi-finals. Stephen worked hard, loved life, and had many hobbies and interests. His family fondly remembers his wit, sense of fun, and appreciation for good food and wine. He was a doting father and step grandparent who took pride in sending interesting gifts that were (almost always) a hit. He wasn’t able to fully enjoy his birthday cake, but as of this writing, his family was able to share it together in appreciation of his time with us after singing Happy Birthday one last time. Stephen is survived by his wife, Martha, son, Eric, his niece Margo Fanning, and his nephew Michael McGilaway. The family is having a small private ceremony for him locally and will later bury him in his home town with his parents and grandparents as he wished. He will be missed.

Stephen Alexander Welsh, 82, passed away peacefully at home on his birthday, May 14th with his wife at his side. Stephen was born in St. Louis Missouri, one of two children of Kendall Reiser Welsh and Margaret Alexander Welsh. He earned his... View Obituary & Service Information

The family of Stephen Alexander Welsh created this Life Tributes page to make it easy to share your memories.

Stephen Alexander Welsh, 82, passed away peacefully at home on...

Send flowers to the Welsh family.