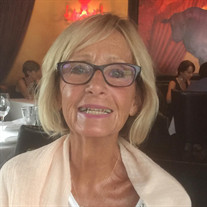 Susan McClanahan, a loving mother of two and an entrepreneur who founded two successful book publishing companies in New York City, died peacefully in Bonita Springs, Florida on Monday, May 17, 2021. Born Susan Diffenderfer in Salina, Kansas in 1946 to David and Virginia Diffenderfer, she was the second of three children. She was raised in Lincoln, Nebraska, and often recounted memories of her joyful childhood there. Susan excelled in high school academics, and following high school, she attended the University of Nebraska, studying English on a full scholarship. Upon graduation, with $400 in her pocket, she moved to New York City with the dream of becoming a poet. Faced with the economic realities of New York City, she began to explore other careers within the writing profession. She soon made her way to publishing, where she worked as an author, editor, and in sales. Then, at twenty-nine years old, Susan launched her first company. McClanahan & Co., Inc., founded in 1975, became the premier developer of textbooks in the United States, a position it held for twenty-one years. With 40 employees working in an old John Jacob Astor mansion in Manhattan, the firm expanded so fast that it was named one of Inc. magazine’s “500 Fastest Growing Companies” on three separate occasions. In 1997, Pearson, a UK based corporation, acquired the company. In 1990, at age 55, Susan founded her second company, McClanahan Book Co., Inc. With a catalogue of 350 titles sold in major retailers, the company became one of the fastest growing children’s book publishers in the latter part of the twentieth century. Its mission was to provide engaging, educational books for children at a price that all families could afford. In 1999, the company was purchased by American Greetings. As Susan built both companies, she was also raising two children, Sabina and Abigail French, alongside her second husband, Donald French. Following the sale of her second successful company, Susan should have been elated, but instead felt a void. “This should have been a high point of my life. I’d spent more than 30 years working 12 hours a day (sometimes seven days a week) … all of which had led me to this amazing apex,” she told Nebraska Magazine.. She began to search for meaning, and would soon find it in a different kind of book. After a friend unexpectedly invited her to attend a church service at Fifth Avenue Presbyterian Church in New York City, Susan began reading the Bible in earnest, and became deeply connected with its teachings. Within a year, she had become a Stephen Minister and then a deacon. Furthering her commitment to service, Susan began volunteering at the James Lenox House, an independent living facility located on the Upper East Side. A handful of these residents became regulars at family gatherings and holidays. Susan also began volunteering with fund-raising at several other non-profit organizations that specialize in sheltering the elderly or in educating children. She was on the board of directors at Achieve3000 (an Internet-based children’s literacy company), where she mentored the founders for 10 years—and also at the Churchill School and Center, a New York school for children with learning disabilities. A lifelong runner who frequently ran 9 miles before most woke for breakfast, Susan also completed six marathons, all after age 60. In 2008, Susan began spending much of her time in Southwest Florida. There—true to her energetic and enterprising nature—she began teaching informal exercise classes in her condo’s gym, soon drawing regulars who joined her ever-growing circle of friends. Throughout her life, Susan retained a bright spark as well as an unrelenting drive for achievement, and for love. Possessing a quick wit, and a caring hand, Susan was at once a devoted mother, aunt, sister, friend, and advisor—and a fabulous host known for her inviting atmosphere and delicious meals. A girl from Nebraska who achieved success in publishing in New York City, Susan lived a life beyond expectation. Though she succumbed to cancer, a battle she fought with vigor for 18 years, her ferocious and tender spirit lives on in the hearts of those who loved her. She is survived by her two daughters, Sabina and Abigail French; sister Dee Dee Costello; brother David Michael Diffenderfer; nieces Ann Husvar (and her family), Laura Diffenderfer, and Carrie Diffenderfer; and many, many beloved friends. A memorial is planned for the fall. The family wishes memorial contributions be made to Hope Hospice, 9470 HealthPark Circle N., Ft. Myers, FL 33908 or online at www.hopehcs.org. Online condolences may be offered by visiting www.ShikanyFuneralHome.com. Arrangements are being handled by Shikany's Bonita Funeral Home.

The family of Susan D. McClanahan created this Life Tributes page to make it easy to share your memories.

Susan McClanahan, a loving mother of two and an entrepreneur...

Send flowers to the McClanahan family.