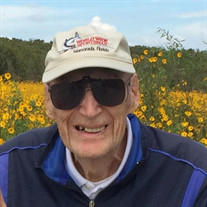 Thomas M. Donaldson, 99, of Estero, Florida, passed away Tuesday, April 19, 2022 at HealthPark Hospital in Fort Myers. He was born May 21, 1922 in Mount Vernon, New York, a son of the late Charles and Grace (Farnum) Donaldson. After making homes in Connecticut, New Jersey, and North Carolina, he became a resident of Estero in 2016. Survivors include his beloved wife, Jean (Hornbeak) Donaldson; children, Nancy Marsh of Estero, Florida, Thomas Donaldson of Wilmington, North Carolina, Lyn Donaldson of Estero, Florida; brother, Charles (Leslie) Donaldson of Fountain Hills, Arizona; 4 grandchildren; and 8 great grandchildren. Tom loved family, fishing, roses, road trips, chess, and baseball. He never turned down dessert; if offered a choice, his response was always “a little of each”. He enjoyed nature’s quiet beauty throughout his life, taking a small boat out on Lake Michigan or Candlewood Lake as a child, sharing his wife’s interest in birds, and visiting as many National Parks as he could. From his training as a naval aviator during WWII, he could identify any plane by its silhouette, and had a life-long habit of pausing whatever he was doing to watch one cross the sky. Tom received his Bachelor's Degree from Stevens Institute and later obtained a Master in Business Administration. He began his career at Singer Manufacturing Company and then joined the Environmental Protection Agency shortly after its inception, retiring after many years of service there. Tom was a devoted husband, father, and grandfather. He was patient and loving, always kind and truly humble. A funeral service will be held on Friday, April 22, 2022 at 3:30 PM at Shikany's Bonita Funeral Home, 28300 Tamiami Trail So., Bonita Springs, FL 34134. Arrangements are being handled by Shikany's Bonita Funeral Home, Family Owned Since 1978.

Thomas M. Donaldson, 99, of Estero, Florida, passed away Tuesday, April 19, 2022 at HealthPark Hospital in Fort Myers. He was born May 21, 1922 in Mount Vernon, New York, a son of the late Charles and Grace (Farnum) Donaldson. After making homes... View Obituary & Service Information

The family of Thomas Mansfield Donaldson created this Life Tributes page to make it easy to share your memories.

Send flowers to the Donaldson family.