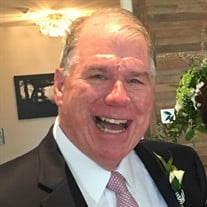 Thomas Patrick O’Keefe, 68 of Fort Myers, FL passed away peacefully Monday, September 27, 2021 at Inspired Living at Bonita Springs. Formerly of Holden, MA, he had been a resident of Fort Myers since 2018. Tom was born June 15, 1953 in Worcester, MA, a son of the late Daniel Patrick and Mary Frances (Cassidy) O’Keefe. After attending May Street School and Chandler Junior High School, he graduated from Doherty Memorial High School in 1971. Tom graduated from the College of the Holy Cross Class of 1975 with a BA in Economics. At graduation, he was commissioned a 2nd Lieutenant in the United States Air Force, where he served for four years of active duty. While in the USAF, he was an air weapons controller attached to the North American Air Defense Command. He attained the distinction of expert controller while on active duty. Upon separation from active duty, he joined the Massachusetts Air National Guard (101st Tactical Control Squadron) and continued service until 1985. His career as a financial planner started at Paul Revere Life Insurance Company where he worked for several years and met the love of his life, his wife Palma. In 1987, Tom founded O’Keefe Investment Management (OIM), helping clients reach their financial goals until his retirement in 2018. During his tenure with OIM Tom supported and hired over 20 Summer Internship and Academic Internship students through Holy Cross. Genuine and authentic, Tom will be remembered for being a fiercely dedicated family man. His wife of 37 years, Palma, was his true love and inspiration. He supported and encouraged her in all her volunteering, work, and service. His sons were his life’s purpose and passion and their biggest supporter in their educational and athletic pursuits. He never missed a game while his sons played sports year-round. An avid golfer, his favorite pastime was playing 18 holes with friends or his two sons, almost never missing a Sunday tee time. He was also a passionate fan of all Boston sports teams as well as Villanova University Basketball, witnessing 30 championships from these teams in his lifetime. Tom was named as an Honorary Alumnus at Saint John’s High School in Shrewsbury, MA for his continued support of the school over many years. Survivors include his beloved wife of 37 years, Palma L. (Carini) O’Keefe; loving sons, Thomas (Mary) O’Keefe of Odessa, FL and Christopher (Lizzy) O’Keefe of Summerville, SC; cherished granddaughter, Grace Elizabeth; sisters, Maryann Burton of Valley Forge, PA, Ellen (Jeffrey) VanDam of Vienna, VA; aunt, Elizabeth “Betty” O’Keefe of Worcester, MA; and dear friends, Mark and Sissy Hall of Fort Myers, FL. In addition to his parents, he was preceded in death by his brother, Daniel B. O’Keefe; and uncle, Robert J. O’Keefe. A Mass of Christian Burial will be celebrated on Wednesday, October 6, 2021 at 11:00 AM at St. John XXIII Catholic Church, 13060 Palomino Lane, Fort Myers, FL 33912. He will be laid to rest in the church memorial garden. A memorial service will be held in Worcester at a later date and will be announced. In lieu of flowers, memorial contributions may be made in Tom’s name to Financial Aid at St. John’s High School, 378 Main Street, Shrewsbury, MA 01545. Online condolences may be offered by visiting www.ShikanyFuneralHome.com. Arrangements are being handled by Shikany’s Bonita Funeral Home, Family Owned Since 1978.

Thomas Patrick O&#8217;Keefe, 68 of Fort Myers, FL passed away peacefully Monday, September 27, 2021 at Inspired Living at Bonita Springs. Formerly of Holden, MA, he had been a resident of Fort Myers since 2018. Tom was born June 15, 1953... View Obituary & Service Information

The family of Thomas Patrick O'Keefe created this Life Tributes page to make it easy to share your memories.

Send flowers to the O'Keefe family.