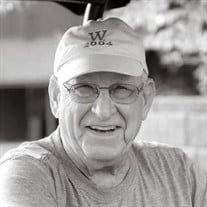 Thomas R Rice, 79, passed away on April 8, 2021. Born in Canton on September 7, 1941, to Joseph and Dorothy Rice. A 1960 graduate of Glenwood High School, Tom helped his father with his landscaping business early in his career path. Realizing his natural born talent at sales, he then worked at Pioneer Foods and Leatherman Seed Company eventually acquiring his father’s business. His mother told him he would make his living with his hands which he did quite successfully evolving and growing the business that would become Rice’s Nursery and Landscaping operating today as Rice’s Landscapes Redefined under the leadership of his sons. Tom significantly contributed to the greening of Stark County and surroundings through the countless trees he planted (as he was fond of pointing out) and beautifully designed landscapes. Tom was known for his kindness and generosity helping so many individuals and organizations in quiet ways. He never met a stranger, made friends quickly, would listen intently knowing your life history within the first five minutes of conversation and caring about how you were doing. His bigger than life character was felt in his presence of loving, joking and his teasing. He loved his family and was so proud of his children and grandchildren. In his later years, he spent time with his family at their farm in the summers and his winters at his home in Bonita Springs, FL making many memories and stories that will endure and be his legacy. He will be fondly remembered by his family, many friends, employees and customers. Tom is survived by his wife of 23 years, Nancy (Hardgrove), his children Bryan (Tracy) Rice, Kevin (Chrissy) Rice of North Canton and Aimee (Brian) Newland of Medina and former wife, Ruth Rice, grandchildren Lauryn, Emily, JT, Tommy and Jane, brother James (Judy) Rice of Bonita Springs and sister Carol (Chris) Burt of Canton and nieces and nephews. A celebration of his life will be held at a later date. In lieu of flowers, memorial donations may be made to the Timken Family Cancer Center online at AultmanFoundation.org or the Aultman Foundation, 2600 Sixth St SW, Canton OH 44710. Condolences may be made to Shikanyfuneralhome.com of Bonita Springs, FL. Arrangements are being handled by Shikany's Bonita Funeral Home.

Thomas R Rice, 79, passed away on April 8, 2021. Born in Canton on September 7, 1941, to Joseph and Dorothy Rice. A 1960 graduate of Glenwood High School, Tom helped his father with his landscaping business early in his career path. Realizing... View Obituary & Service Information

The family of Thomas Robert Rice created this Life Tributes page to make it easy to share your memories.

Send flowers to the Rice family.