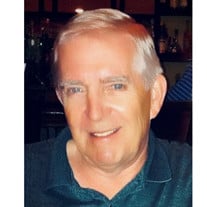 Thomas George Wilson (Tom), 79, of Estero, FL, passed away on March 12, 2022, of cancer. He was surrounded by family and showered with love as he passed peacefully. Tom was born June 14, 1942, to Rosemary and Robert Wilson of Highland Park, IL. Tom graduated high school from the Fountain Valley School in Colorado Springs, CO, where he first developed his love for photography. While at Whittier College, if not golfing, he studied business and music, which started his lifetime passion for classical music. After graduating college, Tom returned to Chicago where he met and courted his wife of nearly 54 years, Holly Haynsworth. They were long-term residents of Lake Forest, IL where they raised their family. Tom had a long and successful career as a specialist and securities trader on the Chicago Stock Exchange (CSE). Known for his good spirit and pragmatism, Tom excelled as a trader and later served on the Board of the CSE as a Governor of the Exchange and a Chairman of the Floor Committee. He loved his work and was highly regarded on the exchange until he retired in 1999. Tom had an infectious personality and a spirited sense of humor. Always curious and engaging, Tom was quick to start a conversation with just about anybody and for that reason, he lived a life full of great friends and fulfilling relationships. Tom is survived by his beloved wife, Holly; daughter, Brooke Grafstrom and her husband, Eric, their children Wilson and Taylor; his son, Craig Wilson and his wife, Lindsay, their son Jack; his brother, Bob Wilson and his wife, Marylin; his sister, Betsy Cichon and her husband, Tom; and numerous beloved nieces, nephews, and cousins across the country. Services will be held this Thursday, March 17th at 11:00 AM at Shikany's Bonita Funeral Home, 28300 Tamiami Trail So., Bonita Springs, FL 34134. Memorial contributions in Tom's name may be made to Momentousinstitute.org in Dallas, TX or The American Cancer Society. Arrangements are being handed by Shikany’s Bonita Funeral Home, Family Owned Since 1978.

Thomas George Wilson (Tom), 79, of Estero, FL, passed away on March 12, 2022, of cancer. He was surrounded by family and showered with love as he passed peacefully. Tom was born June 14, 1942, to Rosemary and Robert Wilson of Highland Park,... View Obituary & Service Information

The family of Thomas George "Tom" Wilson created this Life Tributes page to make it easy to share your memories.

Send flowers to the Wilson family.