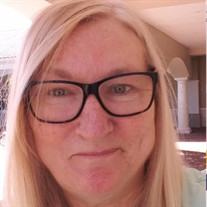 Vicki O’Hair Wilson, 67 of Bonita Springs, FL passed away peacefully on Tuesday, April 6, 2021 at her residence. Formerly of Lubbock, TX she had been a resident of Bonita Springs since 2015, moving from Medford, NJ. Vicki was born November 4, 1953 in Lubbock, TX a daughter of the late Jess B. and Winnifred E. (Garrison) O’Hair. She was a graduate of Texas Tech University where she earned her Bachelors of Fine Arts degree. Her passion for art led her to teach it for over 35 years, with 7 years at various high schools in Texas, and the remainder at Lenape Regional High School District. Vicki was the recipient of the Teacher of the Year Award in 2013 at Cherokee High School in Marlton, NJ. Vicki touched the lives and influenced many young people, some of whom still reach out to Vicki with gratitude on how their careers and lives were enhanced by what they learned from her. Once retired, Vicki enjoyed painting and making pottery, as well as traveling. Survivors include her beloved husband of 40 years, Thomas E. Wilson; loving twin sons, Justin K. Wilson of Marlton, NJ and his fiancée Katherine Clauss, and Brett G. Wilson of Blacksburg, VA; brother, Donald O’Hair of La Canada Flintridge, CA; and sister, Carolyn Braun of Lubbock, TX. In addition to her parents, she was preceded in death by her brother, J.B. O’Hair. Vicki and Tom met in Hereford, TX where they were next door neighbors in a small apartment complex. Vicki was an art teacher at Hereford High School, her first job after graduating. Vicki introduced herself to Tom by asking him if he would like to share some food she had prepared. So smart on Vicki’s part! How could Tom pass up on a pretty, smart and witty woman, and great food? Love blossomed from there. A celebration of life service will be held for Vicki at a later date and will be announced. Memorial contributions in Vicki’s name may be made to benefit children at Cal Farley's Boys Ranch near Amarillo, TX by visiting https://www.calfarley.org/boysranch/ or to your local or Lubbock, TX United Way. Arrangements are being handled by Shikany’s Bonita Funeral Home.

Vicki O&#8217;Hair Wilson, 67 of Bonita Springs, FL passed away peacefully on Tuesday, April 6, 2021 at her residence. Formerly of Lubbock, TX she had been a resident of Bonita Springs since 2015, moving from Medford, NJ. Vicki was born... View Obituary & Service Information

The family of Vicki O'Hair Wilson created this Life Tributes page to make it easy to share your memories.

Send flowers to the Wilson family.