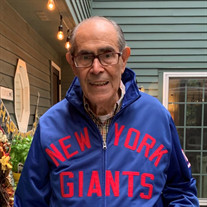 Vincent John DiBartolo passed away on September 2, 2021 at the age of 93, due to natural causes. Born in Calatablano, Sicily on September 14, 1927 to parents Salvatore and Felipe (nee: Garufi) DiBartolo. Vincent had an older sister, Concetta (Connie), and younger brother, Carmelo (Chuck) that preceded him in death. The family moved to the United States in 1929 and eventually settled in Englewood, NJ. Vincent was a graduate of Dwight Morrow High School in Englewood, NJ and the Pratt Institute of Design in Brooklyn, NY. From 1946 to 1948, Vincent was a proud veteran, having served in the United States Air Force, a branch of the Army until it became a separate entity in 1947. He was stationed in Guam, in the western Pacific Ocean. Following his service, he met the love of his life, Anita Greco, and they were married in Suffern, NY on April 12, 1953. They were married for 67 years until Anita passed away in February of this year. Vincent worked as a commercial graphic designer for several New York City firms. Vincent and Anita raised their 3 children and spent their working years in Cresskill, NJ, and then lived their retirement years in Whippany, NJ. In retirement, Vincent was an artist, painting in watercolors and other media. “Nita and Vince” loved to travel, and cruise, and gather with friends, but annual summer family gatherings in Montauk, Long Island, NY was what they cherished most of all. Vincent is survived by his three children, Joanne Fisher and husband, David, of Parsippany, NJ; David DiBartolo and wife, Denise, of River Vale, NJ and Bonita Springs, FL; and Steven DiBartolo and his wife, Susan, of Miami Beach, FL; He is also survived by six grandchildren: Christopher Fisher and wife, Heidi, Lindsey Scillieri and husband, Daniel, Kathryn DiBartolo, Daniel DiBartolo and wife, Michelle, Christina DiBartolo and fiancé, Nick Badalamenti, and Michael DiBartolo; and 4 great-grandchildren, Benjamin and Allison Fisher, James DiBartolo and Olivia Scillieri. A memorial mass will take place in Bergen County NJ in the near future on a date to be determined. In lieu of flowers, the family asks that you make a donation to the Knights of Columbus in his memory. To sign Vincent's guest register or to leave online condolences, please visit www.ShikanyFuneralHome.com. Arrangements are being handled by Shikany's Bonita Funeral Home and Crematory, Family Owned and Operated since 1978.

Vincent John DiBartolo passed away on September 2, 2021 at the age of 93, due to natural causes. Born in Calatablano, Sicily on September 14, 1927 to parents Salvatore and Felipe (nee: Garufi) DiBartolo. Vincent had an older sister, Concetta... View Obituary & Service Information

The family of Vincent John DiBartolo created this Life Tributes page to make it easy to share your memories.

Vincent John DiBartolo passed away on September 2, 2021 at the...

Send flowers to the DiBartolo family.