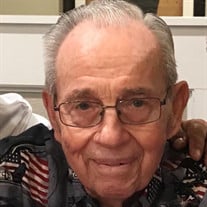 Wayne Edwin Bucy 100, of Bonita Springs, FL passed away April 2, 2022 in Bonita Springs, FL. Wayne was born on October 28, 1921, the oldest son of Oscar James Bucy and Verda Mae (Hembry) Bucy on a farm northwest of Lamoni, Iowa. He attended Bloomington Country School in Lamoni and graduated high school in Lamoni, Iowa. To earn money after school, he worked at the Lamoni Creamery wrapping butter, and delivering milk on his bicycle. Wayne went on to Fairfax Aviation School in Kansas City, Kansas, to fulfill his dream of becoming a pilot. He attended East Tennessee State Teachers College thru U.S. Air Corps in Johnson City, TN. Wayne went on to the National School of Aeronautics as an instructor in Kansas City, MO. He served in the U.S. Air Corps from 1943 to 1945 and worked for Pacific Airmotive in Kansas City, MO, American Airlines, St. Joseph, MO, Alaska Airlines, Inc. in Everett, WA and Flying Tigers in Burbank, CA. Wayne married Bonnie Elaine Evans on March 18, 1945, at the Leon Church of Christ in Leon, IA. They were married 76 years before her death on February 26, 2022. They both were Baptized and lifelong members of the Church of Christ. Throughout his various employments with the Airlines, his career of product support engineer for 30 years, with United Technologies, Inc. Pratt & Whitney Aircrafts, proved to be the most rewarding. He had many overseas assignments and lived in Germany and Australia for 8 years each. In 1983, Wayne retired in Renton, Washington and for many years, enjoyed traveling the world with his wife, Bonnie. He also enjoyed playing tennis, gardening, fishing and hunting with his Brittany spaniels, Roxie and Libby. In 1998, they moved to Lake Havasu City, Arizona, his greatest joy there, was playing tennis, and in 2004 they moved to Bonita Springs, FL to be near Family. He was preceded in death by his parents, his beloved wife of 76 years, Bonnie Elaine (Evans) Bucy, his brother, Oscar “Jim” Bucy, Jr. and his wife, Juleen, and his sister, Neva Smith and her husband, Lloyd. Wayne is survived by his 2 children, Carolle Lynne Kinney (Bucy) and her husband Robert of Bonita Springs, FL and Jeffrey Wayne Bucy and wife, Dena of Loveland, CO; one sister, Juanita Palmer of St. John, MO; 4 grandchildren, Jennifer, Tamra, Amber, and Karah; 9 great-grandchildren, Chandler, Jaxson, Rocco, Dylan, Katie, Alyssa, Remi, Brody, Layne; 2 step-grandchildren, Rodney and Shannon Kinney and 2 step-great-grandchildren, Alex and Weston Kinney. A visitation for both Bonnie and Wayne will be held on Tuesday, April 12, 2022, from 10:00 AM to 12:00 PM at the Slade O’Donnell Funeral Home 103 NE Mill St., Leon, IA. Graveside services for both will follow at the Leon Cemetery. Military Honors for Wayne will be provided by the U.S. Army. To sign his guest register or to leave online condolences please visit www.ShikanyFuneralHome.com. Arrangements are being handled by Shikany’s Bonita Funeral Home Family Owned and Operated Since 1978.

The family of Wayne Edwin Bucy created this Life Tributes page to make it easy to share your memories.

Send flowers to the Bucy family.