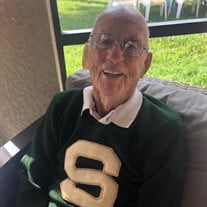 Bill passed away peacefully on April 14, 2022, leaving this earth to reunite in Heaven with Jean, his wife of 63 years and his cherished son, Daniel, along with his parents, siblings and many other relatives and friends. Bill leaves behind... View Obituary & Service Information

The family of William "Bill" Hanes created this Life Tributes page to make it easy to share your memories.

Send flowers to the Hanes family.