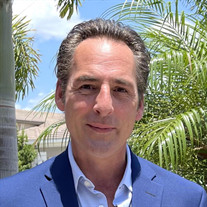 William J. Fornia 49, of Bonita Springs, FL, and a former resident of Columbus, OH died unexpectedly on May 30, 2021, at his residence after suffering a fatal heart attack. He was born June 22, 1971, in Youngstown, OH a son of the late William B. Fornia and Patricia D. (Hohing) Scoccia who survives. He graduated from Youngstown State University in 2000 where he received his Bachelor of Science degree. While at Youngstown, Bill was on the Dean’s List in 7 of the 11 quarters he attended. He was also the Chapter President and a member of Alpha Phi Sigma National Honor Society. He then attended Capital University Law School in Columbus, OH, and received his Juris Doctor degree in May of 2003. He also was on Dean’s List in the spring of 2002 and received the CALI Book award for Mediation. After graduating and receiving his law degree he formed his own firm with two partners, Fornia, Luftmann, and Heck in Columbus. He also had a passion for education and taught school at a local college. He currently was working for Magurie, Schneider and Hassey, LLP in Columbus and teaching virtual classes at Eastern Gateway Community College. Bill was an avid sports fan, loved music, and was a fantastic cook. But the one he loved the most was being a dad to his daughter, Olivia. He is survived by his daughter, Olivia R. Fornia of Naples, FL; his mother and stepfather, Patricia D. and Frank A. Scoccia of Bonita Springs, FL, his uncles, Anthony (Nancy) Clark of Lancaster, PA and Robert Clark of Middletown, VA; his aunts, Beverly (Albert) Scoccia of Parish, FL and Connie (Ron) Rinaldi of Phenix, AL; and numerous nieces, nephews, and friends. He was preceded in death by his father, William B. Fornia, a brother, Michael Fornia who died at birth, his maternal grandparents, his paternal grandparents, and his uncle, Charles Hohing. His family will receive friends on Sunday, June 6, 2021, from 11:00 AM to 12:30 PM at Shikany’s Bonita Funeral Home 28300 So. Tamiami Tr. Bonita Springs, FL. His funeral service will begin at 12:30 PM. Burial will follow at Palm Royale Cemetery, Naples, FL. In lieu of flowers, the family suggests that donations be made to an Education Funds for his daughter, Olivia. Donations can be sent to his mother, Patricia D. Scoccia 16315 Lombardo Pl., Bonita Springs, FL 34135. Bill’s favorite quote was by Sir Isaac Newton and he once said, “If I have seen farther, it is only by standing on the shoulders of Giants.” Thank all of you for being the Giants in my life. To sign his guest register or to leave online condolences, please visit www.ShikanyFuneralHome.com. Arrangements are being handled by Shikany’s Bonita Funeral Home Family Owned and Operated Since 1978.

William J. Fornia 49, of Bonita Springs, FL, and a former resident of Columbus, OH died unexpectedly on May 30, 2021, at his residence after suffering a fatal heart attack. He was born June 22, 1971, in Youngstown, OH a son of the late William... View Obituary & Service Information

The family of William J. Fornia created this Life Tributes page to make it easy to share your memories.

Send flowers to the Fornia family.