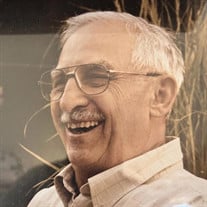 Naples, FL – Richard M. (“Dick”) Vogel, 92, died peacefully in his sleep at home Thursday morning, St. Patrick’s Day, the 17th of March, 2022, following a brief decline in health due to heart disease. He lived a full and wonderful life, bringing joy to all who knew him. Fittingly, for someone who loved to celebrate life, he both entered and left the world on holidays. Born at home on July 4th, 1929, in Ironton, Minnesota, he was the eighth of nine children of Slovenian immigrants Anton and Ursula (“Hrastar”) Vogel, who left the Austro-Hungarian Empire on the eve of World War I. In 1952 he married Patricia Ann Trimmer, of Lander, Wyo., who predeceased him in 2008 after 56 years of marriage. They have five children, Richard (Sally) Lincoln Vogel, of Andover, MA; M.L. Vanessa Vogel, of Ucross, WY; James (Michelle) Vogel, of Naples, FL; Joel (Donna) Vogel of Ivins, UT; and Peter (Chrissy) Vogel of Thornton, CO; ten grandchildren, Tiffany Vogel (d. 2009), Derek Vogel, Jamie Vogel, Dylan Vogel, Maggie Vogel, Auden Lincoln-Vogel, Tyler Kositzke, John Lincoln-Vogel, Hannah Vogel, and Lara Vogel; and four great-grandchildren, Skyela Vogel, Finn Vogel, Abel Vogel, and Tripp Vogel. He is also survived by one sister, Francis Nelson, of Brainerd, Minnesota. In 2009 he married Suzanne Rutherford (nee Jackson), and his family grew to include children La Donna (Rich) Matthes, of Naples, FL and Des Moines, IA; Marilynn Cedarstrom, of Des Moines, IA; and Amy (David) Blair, of Naples, FL; grandchildren R. James Matthes, R. Charles Matthes, and Addison Blair; and great-grandchildren, Jude Sorenson, Coral Matthes, and August Matthes. He graduated from Fremont County Vocational High School in 1947 (Lander, WY), and later received his law degree from the St. Paul College of Law (now William Mitchell College of Law) in 1954 (St. Paul, MN). After law school, he began a long career of more than 65 years as an attorney, business owner, and real estate developer. With two of his classmates, he formed the St. Paul law firm of Vogel, Lemon, and Lenzmeier, and also served as an adjunct professor at his alma mater. He would later form Vogel Law Office in Naples and join Goddard, Perry, and Vogel in Buffalo, Wyoming. In the early sixties, he started Midwest Title Guarantee Company in the Twin Cities, which eventually had branches in several neighboring states. He pioneered a new model of title insurance that employed lay people to do the work formerly done by lawyers, providing better-paying jobs and advancement opportunities for many people, including many women. Later he was one of the principals responsible for Edenvale, a large-scale residential development in Eden Prairie, MN, that was one of the first planned communities in that state. Starting in the late sixties, he and several other real estate businessmen from the Twin Cities came to Naples and formed an informal group that local legend Ad Miller nicknamed the “Minnesota Mafia.” He was possibly the last surviving member of that group, which together with many others helped transform Naples from a quiet and not-so-well known retreat for a few into a nationally known destination for many. In 1972, he relocated to Naples full-time, after starting his second title company in 1971, Midwest Title Guarantee Company of Florida, which for a long time was the largest title company in Collier County. During the seventies, he and his partners Bob Gisselbeck and Bruce De Jager developed the controversial Sundial Beach & Tennis Resort on Sanibel Island, a project that in large part led to the incorporation of that island into a city. In the nineties, he was a partner in SunStream Hotels & Resorts, whose DiamondHead project on Fort Myers Beach was a factor in that island incorporating as a town. These two events caused his friend and competitor, Bob Taylor, to quip, “Dick Vogel may be the only American ever to father two cities!” For the last 50 years of his life, he divided his time between Florida and Wyoming, which he loved ever since he visited a sister in Lander as a youth. Around 1970, he became a founding partner in the Ucross Land Company near Ucross, Wyoming, where he built an A-frame house that would expand greatly over the years, making the “cabin” better to host family and friends for always memorable visits. For several years he participated in the Big Horn Mountain Roundup on his beloved horse Mr. Ed. He also contributed frequently to the Ucross Foundation, and could regularly be found at his favorite local breakfast places with family, friends, and neighbors. Throughout his life, he loved hard work, family, friends, boating, and golf. His boats were often named “The No Return,” and he frequently claimed he didn’t play golf but only visited the course. He liked to be active, especially if it involved a hammer or saw. His home projects, often featuring creative wiring or plumbing, are family legends, including what may be the only purple martin house in Wyoming. His incredible generosity was well known to everyone who knew him, and his loyalty to family, friends, partners, and employees, was unconditional and returned in kind. He never worried about past mistakes or future ones; he lived in the moment – 92 wonderful and loving years of moments. Funeral Services will be held at First Presbyterian Church of Naples, 250 6th Street South, Naples, FL 34102, on Tuesday, March 29th, at 11:00 AM, with a reception to follow at Royal Poinciana Golf Club, 1600 Solana Road, Naples, FL 34105. Donations can be made to the American Heart Association or St. Matthew’s House. A celebration of life will follow at a later date in Ucross, Wyoming. To sign his guest register or to leave online condolences please visit www.ShikanyFuneralHome.com. Arrangements are being handled by Shikany’s Bonita Funeral Home Family Owned and Operated Since 1978.

The family of Richard M. "Dick" Vogel created this Life Tributes page to make it easy to share your memories.

Send flowers to the Vogel family.